Stagflation concerns have weighed on investment markets recently. Our Chief Investment Office believes stagflation remains a risk to markets rather than its base case. Find out why in our latest House View.

Inflation — or more specifically stagflation — has dominated market headlines recently. Stagflation is an economic environment where both inflation and unemployment are elevated, and economic growth is below potential. In this scenario, persistent inflation is the most troubling aspect for policy makers, representing a significant conundrum as those fiscal and monetary measures traditionally used to combat the issue, actually have the potential to escalate it.

Loosening monetary policy has the potential to encourage further spending (increase inflation further) and expansive fiscal policy can stimulate demand — causing the same issue. Therefore, the only real way to combat this is by aggressively hiking rates; something Australian homeowners are currently grappling with following the RBA’s decision to adjust its forward guidance on the cash rate.

The RBA decision was brought about by a Q3 CPI print which surprised most analysts. The headline level was in line with consensus. Rather, it was core inflation (which lifted back to the target band for the first time since 2015) and specifically the broad-based rise of underlying constituents, which took analysts by surprise. Of greatest concern was the increase in non-tradable inflation (goods which are priced locally) where there was surprising strength in a range of services like insurance and restaurant meals. While perhaps concerning in isolation, the expectation is for wage growth to remain stymied, and this dynamic should keep rates under control for now.

Back to the global economy and stagflation. We don’t see the economy as being on a direct path to stagflation. Economies have experienced a major shock — the COVID-19 pandemic. Lockdowns suppressed household demand; policy makers reacted swiftly and sharply — snapping economies out of their down-turn, and fiscal measures lifted growth rates well above what would be considered as normal potential growth. These stimulus measures saw demand roar back above pre-pandemic levels, which combined with supply chain bottlenecks and soaring energy costs has led to higher prices. As economies reopen fully it is the rebalancing of these demand and supply-side issues that should see inflation ease — although not pass altogether. We believe the globe is still in a reflationary environment. Economic momentum remains strong, albeit having peaked, and labour markets tight — both factors should counter the emergence of stagflation. 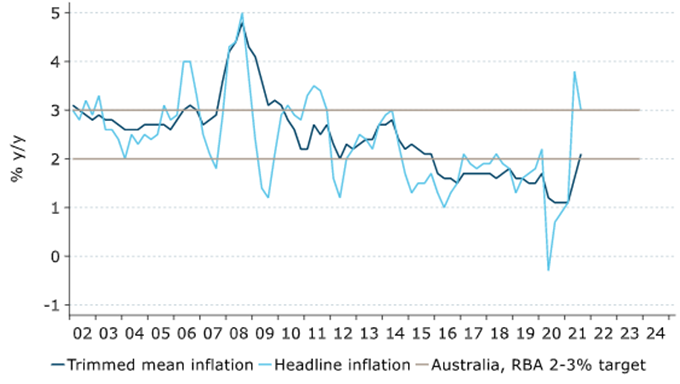 What this means for our diversified portfolios

We hold our mild preference for growth assets this month. There is a clear level of uncertainty across markets with most investors asking, ‘what next?’ This type of environment is typically conducive for volatility and any sizeable dips could present good opportunities to increase growth assets further.

Bond markets came under immense pressure in October, as short-term rate markets tested the resolve of central banks. Our underweight to the domestic bond market served portfolios well over the period.

The sell-off in domestic bonds saw our underweight to the asset class drift further lower. While domestic bonds remain our least preferred asset class within defensive assets, the sell-off has taken us well below benchmark and any major shocks could unwind the gains made to portfolios in October. As a result of these factors we have rebalanced Australian bonds back to those levels held prior to the recent sell-off. This was funded via a reduction in cash.

Tactical Asset Allocation is current as at 1 November 2021.

An ANZ Private Adviser can work with you to understand your financial goals and create a tailored portfolio that reflects your needs and goals. Find out more and request a callback.

Helping your children buy a home

What to consider and ways you can assist children in buying their first home.