ANZ's chief investment office explains that investors should expect a slow and tenuous resurgence in the economy and markets.

Factors such as improvement in companies’ earnings, less risk of a full-blown trade war between the US and China, and greater investor confidence has led ANZ’s chief investment office to look more favourably on shares and other growth assets.

As the year comes to a close it looks like the global economy is starting to recover from its worrying period of declining growth, which in 2019 was caused by the US-China trade war and the delayed impact of higher US interest rates (which were lifted toward the end of 2018).

This gentle levelling out of the economy is far better than a much talked about recession. And we have the world’s central banks to thank in large part for that. Their rate cuts in 2019 and other measures staved off recession and kept the sharemarket strong.

The central banks’ activities countered higher interest rates and the doubt and worry sown by the US-China trade conflict which may have otherwise pushed the global economy into recession.

Also playing their part were the world’s strong services sector, resilient labour market (unemployment remained low), combined with a strong sharemarket. All of this supported consumer spending, offsetting the sharp slowdown in the trade-affected manufacturing sector.

We must emphasise that the recovery we’re seeing at the end of 2019 is tentative – a full economic recovery needs consumers to remain resilient and the services sector to retain its vitality as the manufacturing sector turns the corner. We’ll only see how those two factors hold up as 2020 progresses.

A stronger, more stable economy in 2020

As we head into a new decade, the number one concern for economists and investors remains unresolved trade hostility between the world’s two-largest economies: the US and China. This conflict has the potential to destabilise the world economy, throttling the beginnings of the recovery we’re now experiencing.

And if further trouble does strike the global economy, there’s little more that central banks can do to try and save the day. The ageing, savings-focused populations of the developed economies are not spending as they used to, forcing central banks to cut rates aggressively to try and stimulate economies. Rates are now so low (in late 2019) that central banks are turning to governments to lift spending to stimulate economies, but many countries are ignoring this pressure in favour of a better budget position, for now at least.

There are a few bright spots in the immediate term. Manufacturing, which has been a sluggish drag on economic growth, should increase into 2020 as companies rebuild their sold inventory. We expect global industrial production could lift from 1% - 3% next year. And as mentioned, the services sector remains strong.

The US economy should remain resilient next year but grow somewhat slower than it did in 2019. It was the work of the US central bank, carefully managing monetary policy, that has seen the growth-challenged economy into a ‘soft landing’.

We expect the US Federal Reserve to hold rates steady in 2020 versus market expectations that there’ll be one more interest rate cut.

To support the local economy, we expect the Reserve Bank of Australia to cut the cash rate twice more in 2020, probably by mid year. This will bring it down to an astonishing low of 0.25%. The bank wants consumers to spend more. And despite tax cuts and already low rates, they’re not. While house prices have restarted their climb upward, they don’t yet appear to be making Australians feel richer and more likely to spend. It will likely take more effort on the bank’s part, and possibly the federal government’s, to encourage consumer spending. Both parties appear ready to act if necessary.

The main reason Australians are not spending is that wages and salaries are growing so slowly, meaning households struggle to find extra cash. We expect wage growth to be stuck in the 2% range next year, which is unlikely to help this situation.

For Australia, weak consumer spending is slowing economic growth, and it may be that quantitative easing becomes one of the last tools to try and counter that. For the Reserve Bank to begin such an aggressive program of government bond buying would be a radical step in Australia, and likely to only come when two more cash rate cuts do not prove effective.

The Sino economy is slowing down as part of a long-term, necessary, structural change as it transforms from a manufacturing into a services-based economy. Government policies to limit the slowdown and manage fallout from the trade war with the US are more or less working. With inflation under control, the Chinese economy is likely to continue to slow steadily but without cause for alarm, in line with a slowdown which has been under way for the past decade.

To boost the weak economy, rates were cut below zero, and the central bank has restarted a bond-buying program to keep rates low and to stimulate growth. The eurozone economies need resolution to the US-China trade war and the prolonged stress of Brexit to get a break. We expect the economy to stabilise next year at growth rates not dissimilar to 2019.

Investors can have a little more hope in the sharemarket

Caution remains the keyword in investment markets as the new decade begins, but we expect risk assets (such as shares) to perform modestly well. Just don’t expect the solid gains of 2019 to be repeated. Instead, signs indicate mid-single-digit returns for shares, largely because companies’ earnings are likely to be in low single digits in the months ahead. Sharemarkets have already moved to price this moderate-growth/low-interest-rates outlook.

If the recovery becomes stronger, defensive assets such as real assets will be more expensive and could come under downward pressure. For now, we expect real assets such as international property may lag general sharemarket returns, as valuations are stretched following a strong run in recent years. On a similar note, bond market returns will likely struggle to return much more than 1%.

Where we stand on investments

For 2020, we are investing for a growth turn in the economic cycle. And so we’ve raised our expectations of shares and other growth assets.

There’s likely to be little earnings growth for global sharemarkets in the year ahead, implying downgrades will likely continue across most markets and sectors, but the risk of a large drop in earnings has receded.

While we are comfortable that the downside risks to growth have been removed, we are not convinced the global economy is going to respond strongly to the improvement in financial conditions from US Fed rate cuts, easier policy from the European Central Bank and the Chinese monetary authorities. 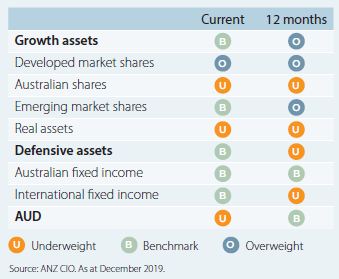 In November, we took growth assets back to ‘benchmark’ from a small ‘underweight’ but did not move further. While a recovery looks likely to play out, share and bond markets have moved ahead of a turn in the economic cycle. Risks still remain around trade tensions and the pace and duration of a re-acceleration in global growth.

Globally, shares are fairly valued, with Europe and Japan relatively attractive versus the US market. Australian shares are close to the top of our fair-value range.

Bond yields are likely to remain low for an extended period, and as such we keep Australian and international bonds at ‘benchmark’.

If the recovery strengthens as 2020 progresses then riskier assets (the Australian dollar, emerging market and value equities) would gain traction, while defensive assets such as real assets could come under downward pressure.

We think the Australian dollar will likely remain under downward pressure as the RBA continues to cut the cash rate so we have an ‘underweight’ on the Aussie.

Discover how an ANZ Private Banker can help

An ANZ Private Banker can help you navigate the complexities of wealth. Find out more and request a callback.

With cash looking set to deliver negative real returns in the years to come, investors are seeking alternative opportunities for diversification and growth in their portfolios.