But it will take a spike in companies’ earnings to keep it going, explains ANZ's chief investment office.

The bull sharemarket has just turned 10. That’s a decade of solid, barely interrupted growth in equities across major world markets since the global financial crisis. That is an extraordinarily long time for the upswing phase for the US investment cycle.

Most investment cycles do not die of old age but are usually ended by a central bank tightening policy to restrictive levels.

The most recent extended late-cycle that was supported by the US central bank (Federal Reserve or Fed) pausing its tightening policy, and even cutting rates stretched from 1995 to 2000, ultimately bursting the tech bubble.

The current Fed pause will likely extend the cycle, but for how long?

A precarious point in the investment cycle

An investment cycle is simple to describe: there is a growth phase through which rates are steadily lifted; it then peaks as policy turns restrictive to levels that leads to recession, and bottoms out with the cutting of rates.

We are now late in the investment cycle, meaning we are due to head down as higher rates start to dent growth. However, the Fed has now paused as subdued inflation and a more recent sharp slowing in global growth have reduced the need to shift policy to restrictive levels.

Nevertheless, we are late in the investment cycle and as we saw at the end of last year, any whiff that the Fed would lift rates could generate large corrections across sharemarkets.

Therefore, the biggest force that could tip markets over and send them down is inflation. If inflation started to alarm central banks then they’d likely lift rates to restrictive levels which would dampen growth, lower expected earnings and likely drive sharemarkets sharply lower. 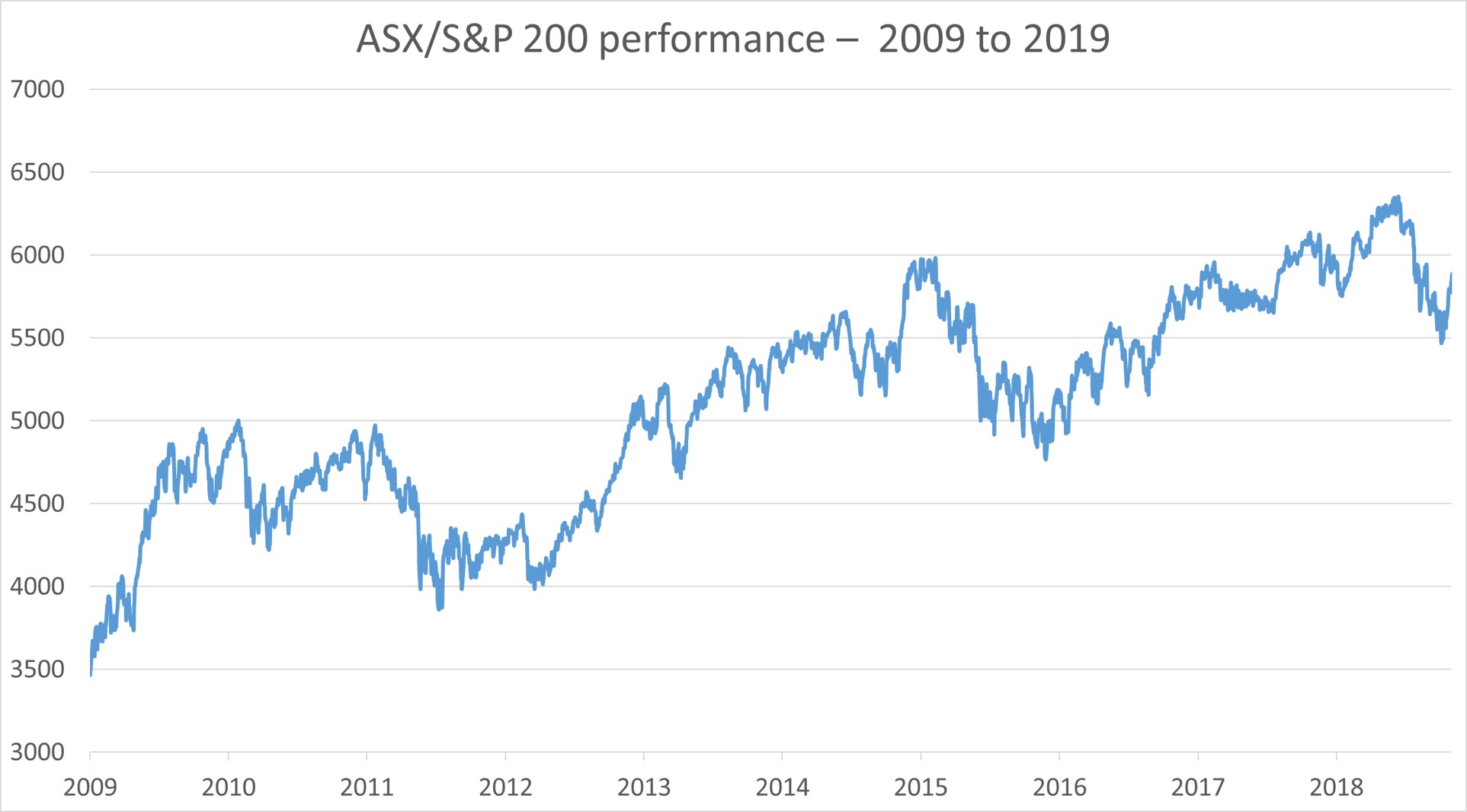 On an economic front, the Fed pause and signs that China is modestly adding stimulus have eased financial conditions and will likely support recovery in growth momentum through the latter half of 2019.

We have a less confident outlook for Europe and Japan as any potential growth in these regions remains low and fragile, and possibly requires further policy support from their governments and central banks.

Australia is subject to the softer growth worldwide and declining house prices. But countering these negative forces are the lower value Australian dollar, steady and low interest rates, and government measures to stimulate the economy. In our view, the risk is that due to credit rationing, Australia could soften more than the global outlook through 2019.

Taking all these factors into account the slide in global growth is likely to be arrested around mid-year. Markets seem to be already valued with this in mind.

As for a more sustained equity market rally, this would take some lift in growth and expected earnings, with the Fed staying on hold into 2020. If this happens the question will then be how sustainable such a rally would be given that this environment would likely see the Fed recommence tightening and possibly shifting rates into the restrictive zone that would end the cycle.

How we can help

Uncertainty over how much longer the late phase of the investment cycle can be extended is the reason we are somewhat cautious about growth assets such as shares. As you can read in the table below, we’re holding to a benchmark (neutral) position.

Equities, fixed income, cash and currency are relative to benchmark.

ANZ’s chief investment office outlines why we’re experiencing a sharemarket rally, the risks that investors are facing, and its own asset-class positions.

Weakness in the global economy is becoming clearer and weighing on sharemarkets: so will the gradual decline become something more dangerous?